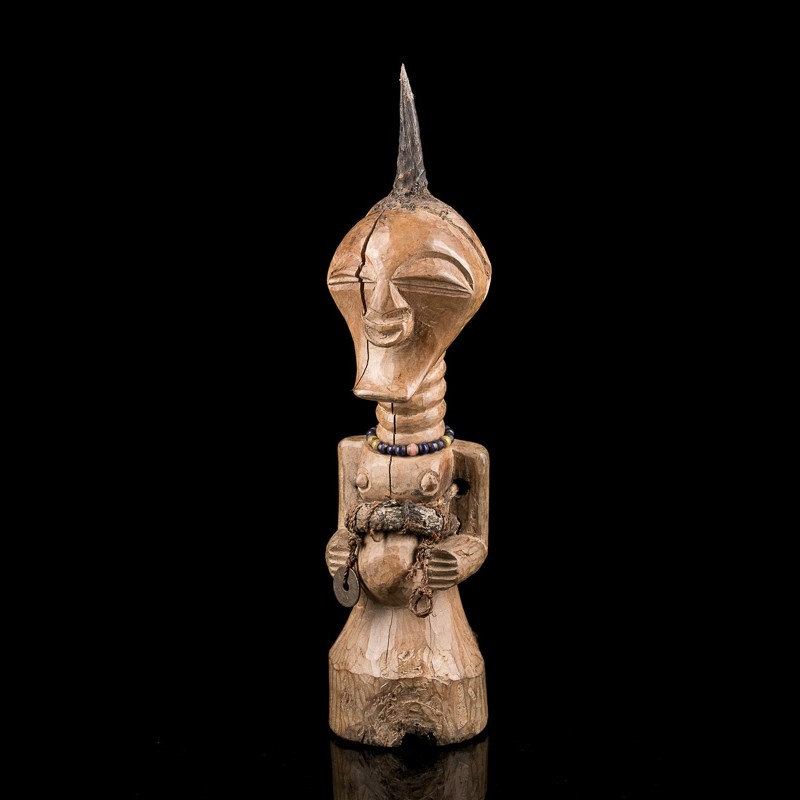 Fetish and magic in the African art of R. D. Congo

Magic statuary ensures the general well being of the village. Cubist fetishes are loaded with various substances, enclosed in the abdomen, in horns planted on the head or harnessed with materials such as bones, rope or cowries.

The attitude of this statue is serene and proudly enhanced by its cylindrical base, the hands resting on the belly. The ringed neck of this statue gives it a beautiful silhouette, the forehead is particularly observed, a powerful face with tight features, half-closed eyes, a nicely flat nose and a crescent-shaped mouth. The patina of this one is particularly interesting, honey-coloured, with more than pronounced traces of use, suggesting a dating at the beginning of the 20th century.

Born in Parma in 1937, Franco Maria Ricci belongs to a family of aristocrats of Genoese origin. In 1963, he set up a graphic workshop where he published posters, calendars and catalogues, an activity that he would maintain until the end of his life with his wife and his team. Fascinated by typography, he collected everything related to Giambattista Bodoni, creator of a typeface and author of the Manuale tipografico (1818), which Franco Maria Ricci republished. "This is the only character that Napoleon wanted to see during his visit to Parma", Franco Maria Ricci explained to Anne Pons in an interview for L'Express. For the French, Franco Maria Ricci's name is essentially linked to the FMR magazine that he edited in French in the years 1980-2000, but this cultured Italian was also a graphic designer, bibliophile and huge collector. He died on 10 September 2020 at the age of 82.