Use of traditional Gouro masks

The Guro culture is famous for its masked festivities, sometimes religious and sometimes secular. This African Yu mask was worn during religious ceremonies; he represents an idealized ancestor.

Three sacred masks are usually on display, centered around the zamble, a mythical ancestor depicted with features of an antelope and a leopard. Accompanying zamble are his grotesque brother, Zuali, and his beautiful wife, gu.

This gu mask takes its name from the translation, "courageous woman". It is one of the many yu masks worn by the Gouro during the mourning of deceased members of the community.

Gu reflects the ideals of beauty of the Gouro people. She is attractive, sings her father's praises and protects young wives against any ill will from their new family. The wearer of the gu mask will often play and mock gender roles with the wearer of the zamble.

The three yu masks belong to respected Gouro families. As well as being worn during funeral ceremonies, they go out for celebrations, to resolve disputes as well as to unmask wizards.

The Gouro share stylistic and cultural elements with the Baoulé and the Yohouré. 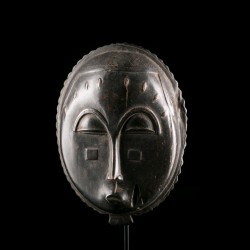 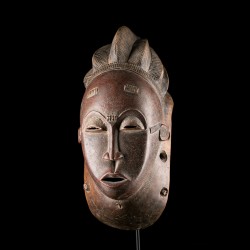