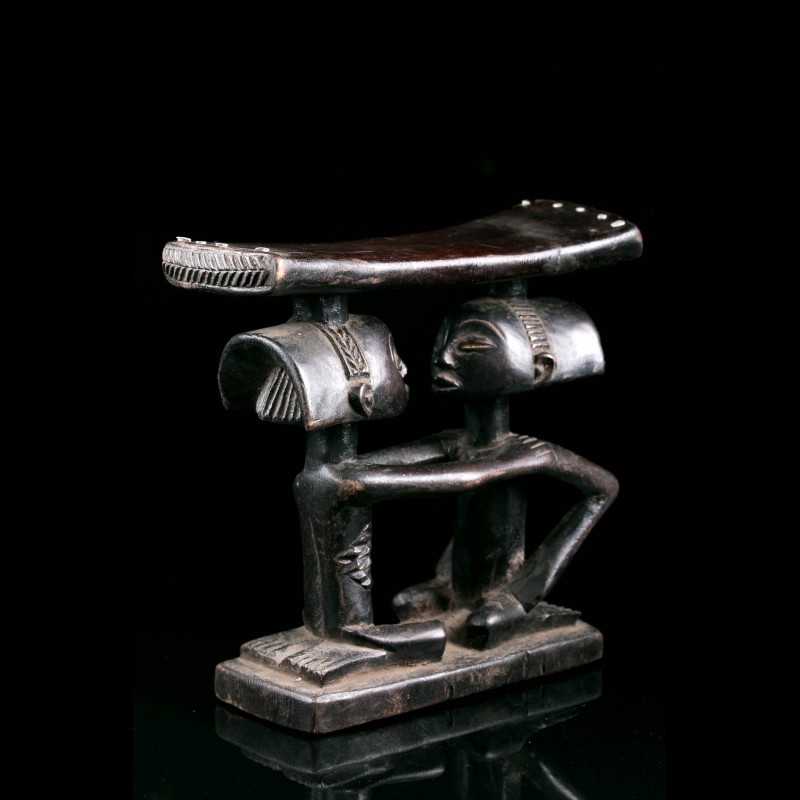 While not an object exclusively limited to royal use, headrests were prized possessions of Luba chiefs. Wooden headrests are used as pillows to preserve intricate coiffures. Some hairdos took up to fifty hours to complete. Using a headrest allowed the hairdo to last two or three months. In addition to the great personal attachment that Luba people developed for their headrests, these were also seen as the seat of dreams. Luba consider dreams to be prophetic: dreams foretell important events, provide warnings and communicate messages from the other world. It is therefore fitting that headrests should be supported by the female priestesses who serve in real life as intermediaries and interlocutors for the spirits of the other world.Among the characteristics of Luba sculpture are: intricate hair-dress, often in the form of a cross, or falling down like a cascade; a grooved diagonal band separating the hair-line from the forehead; eyes shaped like coffee-beans; small simplified ‘cat’s ears’; ornamental cicatrices in relief on the body; the surface elaborately worked and polished. The traditional carvings are for ancestor and spirit cults, for initiation, medical and divination purposes. The favorite theme in sculpture was woman since, according to the Luba myth, vilie was the first woman spirit, founder of the clan and guarantor of fertility and the lineage. Women were cult guardians, and the royal wives played an important role: sent as emissaries to the chiefs of neighboring ethnicities, they would contract profitable political alliances based on marriage.  Some figures are freestanding, almost always in a frontal position, often with their hands on their breasts; others are kneeling, sitting, or standing figures whose upraised hands serve as supports for bowls, seats, and neck rests. The figures are often characterized by elaborate scarification patterns on the body. The diviner, painted white, used themboko, a seated or crouched female figure holding a bowl robbed with kaolin. He would shake her and analyze the position of the different objects the bowl contained. In the healing ritual, the sorcerer would use the kabila, or daughter of the spirit, which consisted of a figure and receptacle, which were also placed at the entry to the house during the childbirth. The female figures are modeled in rounded forms and have what is called dodu; that is, a stylistic tendency toward plumpness. One well-known Luba sub-style has been called the "long-face style" of Buli. It contrasts strongly with the roundness of other Luba figures. The faces are elongated, with angular, elegant features. Many Luba statues also carry magic ingredients on the top of the head.  SpecsOriginEx private collection Belgium, J. RenuardSize17 x 22 cmDatingCirca 1960Material(s)Wood 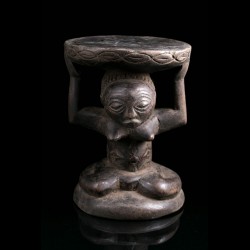 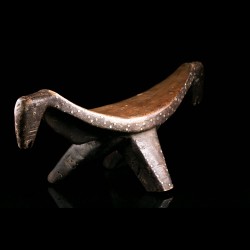 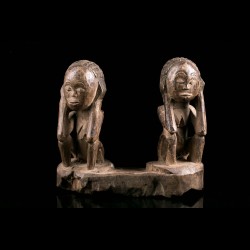