African summit mask or crest called Ungulali from traditional Idoma art in NigeriaUngulali type crest made of wood with Janus heads facing away from each other. To the top of each head a large horn. The faces painted with kaolin clay, almond shaped eyes with spiral scarification mark to the side, open mouth displaying a row of teeth. To the conical neck a necklace of twisted raffia rope.The Idoma people are the second largest ethnic group of Benue State in Nigeria, who, despite the influence of Christianity, still believe in the ancestral spirits known as Alekwu, who are seen as a link between the living and the dead. These spirits are believed to guard the community and provide judgement on matters relating to adultery, theft and murder. Crests such as this are worn on the top of the head and are associated with agricultural festivals and funerals. The name ungulali means ‘flute’ and is a reference to the flute music that accompanied the dancers when they performed their rituals.Origin : private collection, FranceDating : 1960'sSize: 58 x 23 cmMaterials : wood, kaolin 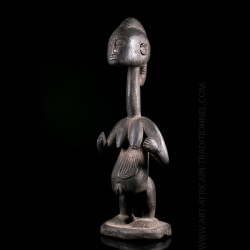